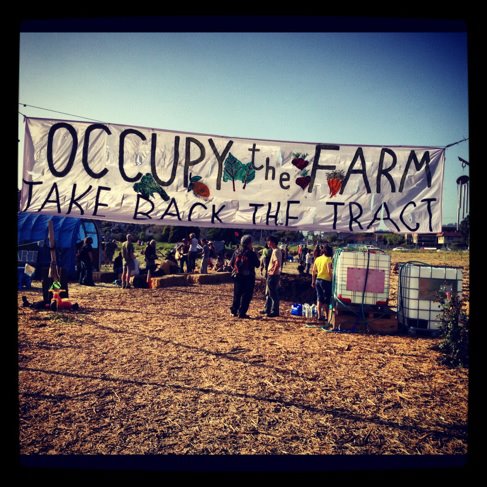 An Oasis in Albany

We heard the police were threatening eviction, so we showed up at 11pm. Coming upon the farm in the middle of Albany felt like a surprising breath of fresh air.  I crossed the street from the bright lights of the gas station where cars were zipping in and out playing loud music.

Suddenly things were a lot more still. It smelled like soil.  An oasis in the middle of the city.

In the dark of night, the Gill Tract reminded me of a festival. (Without the dubstep djs and glow sticks.)  People wandered about; a slightly mysterious vibe. It was hard to see faces but we still said hello.  As I walked in with my bike, I passed a few security guards talking quieting by their truck.  They smiled and said good evening.

I walked down a tree lined road. People were huddled in groups talking and laughing. It was cold. Everything was dark expect for a few flashlights and the light from the gas stations across the road.  Tents pitched haphazardly in the fields.  Security guards milled the premises with bright flashlights that sometimes streaked across the rows of crops.

Around midnight, a small group of us gathered in the Seed Library to do a meditation. Inside of a frame of bamboo stalks tied loosely together, we sat on straw that covered the cold soil in the shape somewhat like a mandala.

There was a hint of tension in the air.  Like we could be raided at any moment. But mostly everything was peaceful and silent.

A few security guards walked by with flashlights. A man was walking with them with a small video camera. Someone shouted, “Hey guys look out! There’s an occupier behind you!”

But it felt like a front, as we all knew the UC Berkeley chancellor wanted us gone.

Pancho sat a small camping light in the center of our circle. He said, “we need the spiritual people to act, and activists to get spiritual”.  As violence increases, we are responding with greater love.

We got quiet and closed our eyes.  The stillness of the farm got quiet around us as people wandered off to their sleeping bags. I realized I was sitting on the soil (soul) of our Earth.  This land could soon be covered by the cement floor of a shopping mall or apartment building.  But right now, it’s cold, damp, alive soil.

In the middle of the city, we found ourselves on a farm. Growing real food. Surreal and incredibly real at the same time.

Earlier that night, I attended my friend Joshua Kahn Russel’s book launch, Organizing Cools the Planet. An audience of dedicated activists gathered in a small bookstore in San Francisco. We engaged in a heated discussion about the Occupy movement, Keystone pipeline, marginalized communities, and building a utopia vision for the future. Joshua offered an analogy:

You take a bunch of people new to farming to a farm harvest time and they might wander around in awe the abundance.  They might see all the food and start picking it to eat.   But when you ask them to till the land or plant seeds, they will say, “No way, we have so much food here! There is no need for that.”

But anyone who has farmed knows a lot more goes into farming than just harvesting.

When we mobilize people to rally or call to action, that’s kind of like harvesting.  And we’ve been harvesting a lot lately with Occupy Wall Street.  We forget how much work it takes to get to a point where people now feel compelled to act. It takes a lot more than actions to build a movement.  We need to build relationships, take care of ourselves, and design for the future.  We need to till the soil and plant seeds.

Check out Occupy the Farm on Facebook or get your hands dirty at the corner of San Pablo & Marin in Albany, CA.

One thought on “Occupy the Farm: What farming teaches us about movement building”